Tonight the blanket has reached a milestone-the main body is finished. All that is left is the border, I can’t decide what to do so I am browsing. The Attic24 blog is proving rather helpful with this though! It is a huge relief; as much as I love the blanket I was getting a little bored of popcorn stitch combined with a row of treble and a row of double. It isn’t quite as large as I originally planned but it is plenty big enough for it’s recipient and has used over 800g of wool so far! I am also a month ahead of schedule as I had estimated 6 months and it is 5 months on Monday. I might not break any records for speed crocheting (yet!) but I feel quite proud that I have made such a large project, most of which has been completed since Christmas.

There was a moment which was more luck than judgement-my ball of wool ran out with literally centimetres to spare at the end of the row! However I knew it was coming and I decided to carry on regardless and switch colours half way through the row if need be since the next colour was very similar. Luckily I didn’t need to, but it always helps to have a plan b. 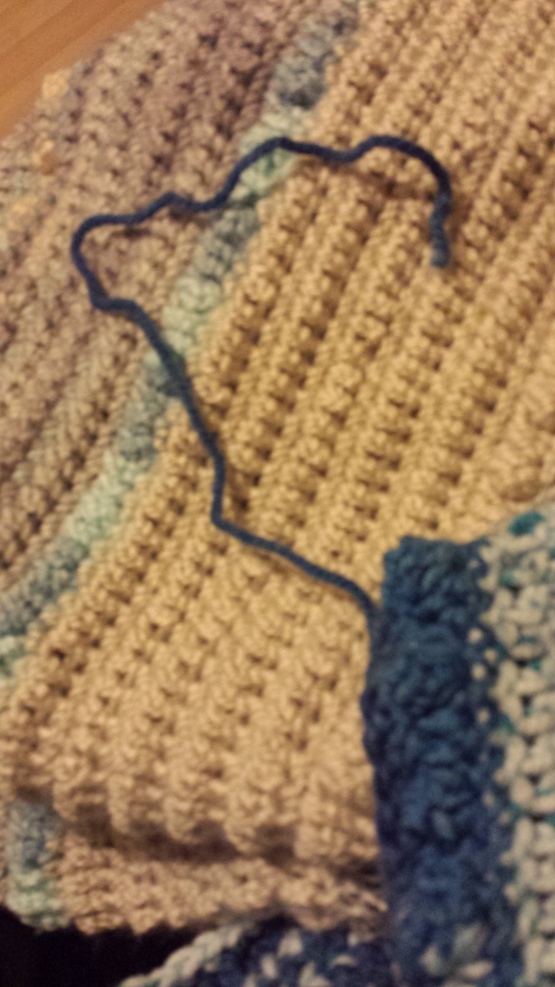 I can safely say that I will be avoiding popcorn stitch in my future crochet projects; as much as it looks attractive it really is time consuming and there are other ways to add texture which are far less faffy! I did however take a photo of the profile of the stitches because they look impressive (to me at least).

The best part about nearing the end of a project is of course deciding what to make next. The possibilities are endless! I’m considering another blanket as I have some lovely rainbow colours to make one for my daughter, I quite fancy crocheting a cardigan for her too and maybe some more mandalas. I might even knit instead of crocheting! I know it’s getting late but I might also make something spring or Easter related-a little bunny maybe?

Tomorrow’s aim though is getting the border started (and finished!) It’s good to aim high!