It’s been a bit of a busy week or so for card making, with Father’s Day and birthdays. Luckily I’d been planning them out well in advance so it was just a case of finding time to make them. (Sometimes easier said than done when unexpected things crop up!)

The first card I made was a good luck one for a friend who was moving business premises. I’d seen designs like this on Pinterest and had all the bits and pieces there to make it. The four leaved clover is 4 punched hearts with a gem in the middle, I embossed the card first for a bit of texture. A heat embossed greeting (with glitter added carefully using a Sakura glue pen) and a ribbon with gemstone brad just about finished it off. Quite clean and simple, especially with it all being green. 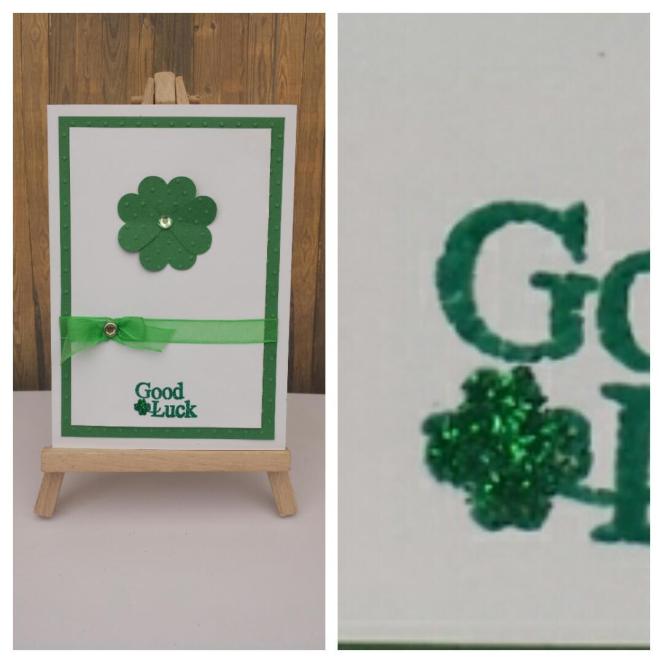 The next card was for a friend’s birthday. It is a really simple one layer card, with a heat embossed image and greeting. I then chalked the rainbow over the image to add a bit of colour. (Confession time here-I made it about 4 times before I was happy because of the black glitter embossing powder being so messy and even smudging when I added the chalk.) This was the best it was going to get. I like the effects you can create with heat embossing, though it’s definitely a case of more practise needed.

The final card (that I can show!) is another Father’s Day card. I was again inspired by Pinterest with a nice simple design. I cut the lettering using the Cricut machine and used paper from the Docrafts Mr Mister range as the backing. I used Kraft card as a background for the lettering and embellished it with blue baker’s twine topped off with a button that picked out the orange from the backing paper. I also added some blue domed stickers to the corners of the Kraft panel. It was quite quick to make but I think it looks quite effective too.

My next cards are a bit more complex to make, with designs needed for two little girl’s birthdays cards. Both like different things so they will be quite challenging but fun I think. The bits for Dave’s Father’s Day card from the kids are still drying but we will assemble them later!

15 thoughts on “A Cluster of Cards”