In case you hadn’t got the pun, this is a long awaited allotment update. It’s been a couple of weeks since I’ve had a long stint there, though Dave has done some weeding and harvesting on his way home from work on the odd occasion.  I was fully expecting a jungle, so I wasn’t at all surprised when I saw the state of it. The heat and rain had given the weeds all of the ammunition they needed to take over. Fortunately for Jess, who is scared of the tall weeds, there weren’t any snakes or tigers lurking in the wild. However, there were a few things that we had actually planted that were desperate to see the light of day. There were also lots of these caterpillars, which the children spent quite a long time searching for once they had found the first. 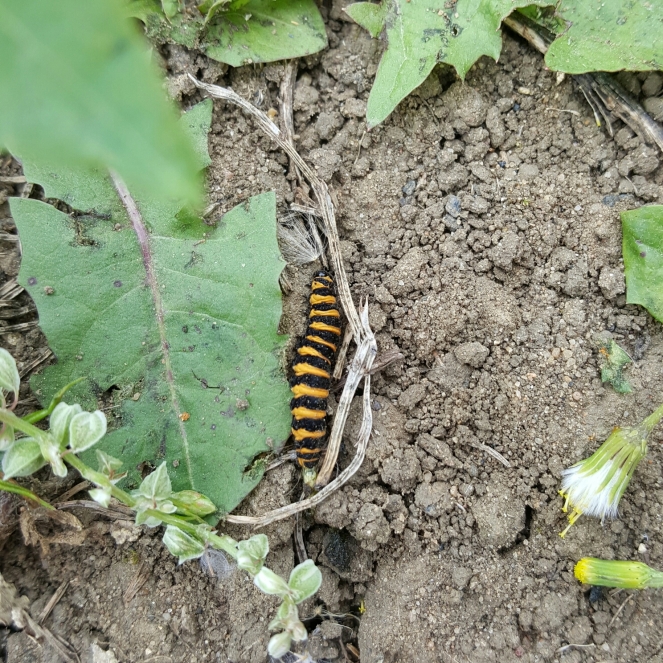 Today was the day to face the music  (and the potential large animals) and sort it out. The children and I went this morning for a couple of hours and we harvested a few beetroot and runner beans (the kids spent ages in their beanstalk wigwam), and I weeded all of the raised beds and began hoeing out the paths between them. By around 11 o’clock, though, the sun was a little too fierce given that the shed provided our only shade and I decided to bring the children home, planning to return later in the day.

When we got home I sorted through the runner beans and discarded the stringy ones (by discard I mean send the children to the bottom of the garden to feed them to the chickens-I told them they were like the chicken equivalent of sweets!) I then chopped up and blanched the good ones so we have a nice freezer stash for when the weather is colder and we fancy roast dinners again. Unfortunately, because we hadn’t been and harvested them soon enough, quite a lot were no good. We have learned our lesson and will harvest the next batch much earlier.

We returned later on, armed with Daddy, who knows how to use the petrol strimmer. Those weeds didn’t know what had hit them! Of course, we then had to dispose of the weedy evidence so we had a bonfire. There were heaps of them from our previous efforts which had dried out really well so they helped with starting the fire. It smouldered for quite a while as we carried on hoeing paths and looking at the progress of the crops. At one point the owner of the field backing on to the allotments came to check that we knew what we were doing with the bonfire, though we had been really careful with where we put it. On our patrol of the rest of the plot, we discovered that the tomatoes are finally fruiting, albeit sparsely, and that the red cabbages are coming along beautifully (the caterpillars also seem to agree with this). The butternut squash are taking things slowly, although one or two have flowered. We fed the tomatoes and watered everything else to quench it’s thirst as we’ve had some very hot days lately and only small amounts of rain. Before going home (all of us smelling like arsonists thanks to the smoke and ever changing wind direction), we put out the fire. I was really surprised by how much water it took to put it out, we filled the large water container 3 times before we were satisfied it was no longer smoking.

Today marks the start of Dave’s holiday from work, so we will continue in our mission to make the plot less ‘Homer Simpson’ and more ‘gym enthusiast’ in appearance. Despite me wearing gloves, my hands have several blisters on so I may leave it a few days before tackling any more weeds. It’s a hazard of the job (as are nettle stings, thank goodness for dock leaves).

Goodbye for now, I’m off to find some hand cream, and plan what else I can do with beetroot apart from pickling it!

6 thoughts on “Trying Not to Lose the Plot ”