I have a lot of Mother’s day cards to make for various people (including my mum and my mother in law!) I decided it was about time to begin, being ever so organised. Last week the lovely Paper Puff posted about her Mind the Gap card, which was inspirational!

I investigated the cardmaking cupboard to see which things I could use for a ‘gap’ card. The Docrafts Folk Floral range came up trumps (hope the flowers smell nicer than that-sorry, I’ve spent all weekend listening to my children’s toilet humour!) and I chose a pretty decoupage. I was on a roll, then a minor disaster struck. (Lack of planning came back and bit me on the bum!) Not one of my card blanks was right for the job, as they needed a fold at the top with a long front. It’s rare that I make my own base cards as I have about six billion of varying sizes, colours and weights. (Mr C would confirm that this is only a slight exaggeration of the exact number and there *may* even be more than that!)

I used my super duper heavy weight water colour paper and trimmed it to make an A6 size card. I placed the first layer of the decoupage on the front and decided, roughly, where to place the gap. Choosing colours carefully (you can’t beat flowers/spots and stripes together!), I cut the backing papers to fit both parts. I then attached the decoupage using double sided tape and built up the layers.

As always, the ribbon was an afterthought. Normally I’d place a ribbon where the gap was so I had to think a bit more, but I knew it needed ‘something’. Being a special card, the ‘something’ had to be a bit fancy, and there’s not much more extravagant than two layers of ribbon. I finished with a knot rather than a bow because a two layer bow is beyond my capabilities (maybe I should work on that).

Of course, no card is complete without my ‘trademark’ single gemstone. (I’d maybe have used more than one but only one flower had a centre that looked right with it!) 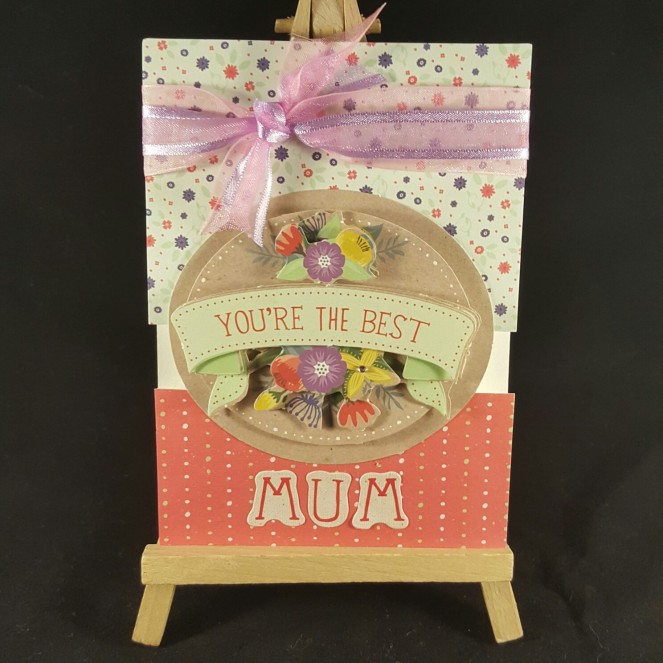 I think it looks very pretty, though Royal Mail will be rubbing their hands together with glee at the postage costs thanks to the big knot and the decoupage.

How’s your Mother’s Day crafting going? What are you making?