My lovely niece is 6 tomorrow (I can hardly believe I’ve been an auntie for that long!) and, as always, I’ve made her birthday card. My parents in law also requested that I make her one from them, and suggested owls as a theme. They also wanted it to have a 6 on it and to say ‘granddaughter’ on it too. I actually quite like having a decent specification to work to as it makes the design much easier.

Last year I made another owl card, and (this is where my blog is handy for me) all I had to do was look at my previous posts to get a picture of it up to help me with the layout. I chose fairly pretty, summery papers to cut the owl out using my Cricut. I also cut out the number 6 with the same cartridge (Cindy Loo-one of my favourite and most used cartridges). I typed the sentiment in 3 different sizes and fonts, then, when it was printed, I chose the one that fitted the best. Embellishments were kept fairly simple; a few pearls and a big paper flower from the Boofle collection were perfectly fancy enough, with a few mini flowers to fill in the space. I love the summery combination of pinks and greens together. 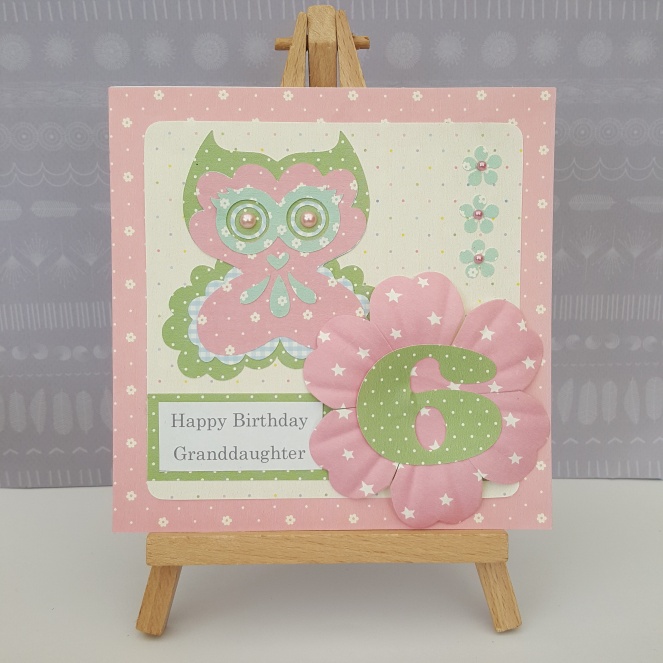 For the card from us, I decided to use bunting as I’d made her some fabric bunting for her new wooden play house. I had some pre cut card bunting in my stash, and I combined it with some baker’s twine to make a little string of it across the top corner. Before that, I embossed the card blank with my Swiss dots folder-it’s an oldie but a goodie! I then ran a slightly dried up pale pink ink pad over the raised areas to add colour and definition. Because the card was bigger than the folder, I had to run it through from the opposite side, matching up the dots. Unfortunately this resulted in a flat area. This is where the skill of ‘making a mistake look intentional’ comes in again. Because the line was perfectly straight, it made an ideal guide for adding some lace as an embellishment . I cut the 6 out twice to make a shadow effect and stuck it over the band. The card still looked like it needed ‘something’. I came to conclusion that ‘something’ must be butterflies. I used two mini dies to cut butterflies in a coordinating green (as I’d used pinks and greens for the rest of the card). 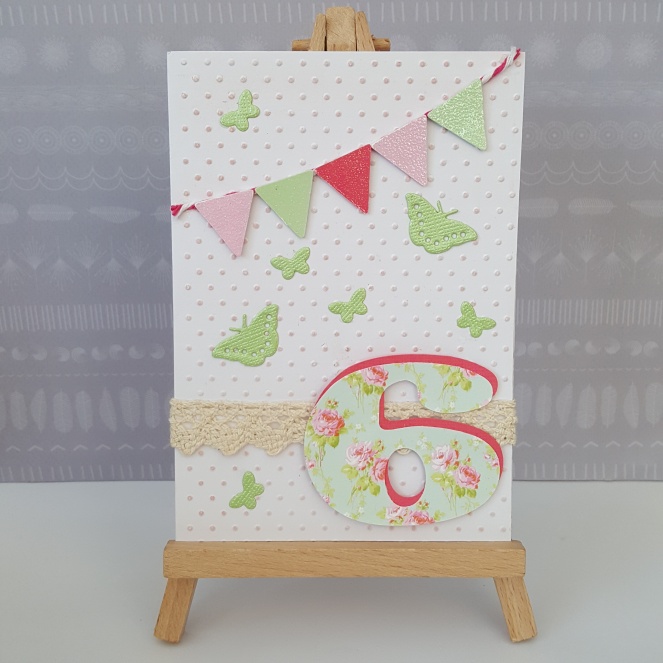 It was lovely to make such girly cards, I hope she likes them! Here’s a picture of the bunting I made for her play house too, which I made using pinks and blues. It was a fab way to use up scrap fabric and didn’t take long at all. 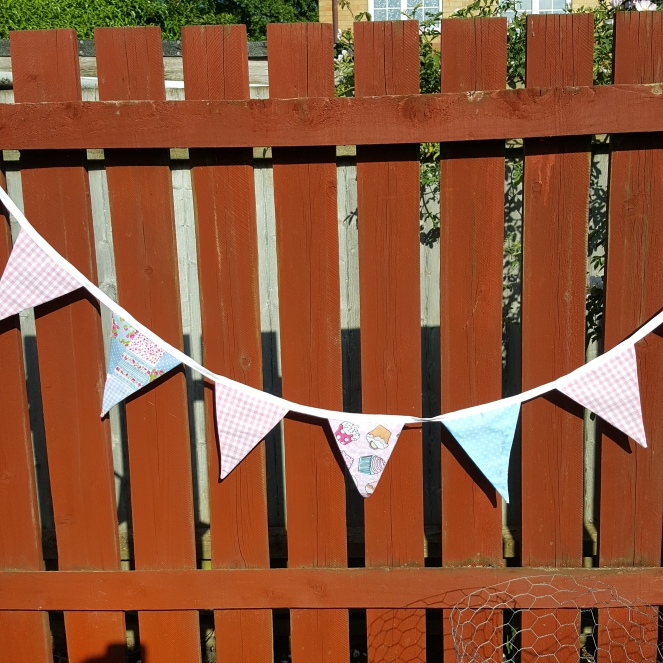 What are your favourite summer cards to make? What do you use as starting points for your designs?