I have seen lots of examples of beautiful blankets created from simple knitted mitred squares. Often, these are made from scraps of yarn leftover from other projects and so they are sometimes referred to as memory blankets. I’ve also seen them called ‘ugly’ blankets because the yarn doesn’t necessarily coordinate as well as if specific yarn has been purchased for the project.

I have a ‘fairly’ substantial collection of scrap yarns, but, to be honest, I’d never looked upon them as memories and seen them as purely functional. For example, they were handy for chopping a length off here and there to hold stitches, or for if I wanted to test out a new pattern. Despite my attempts to clear out (by giving some to the children), my box was still overflowing so I decided it might be time to take action.

This week, I have been a little under the weather, the kids have all been ill, there’s been some sad news in the family and I am trying to keep on top of Christmas tasks and the children’s ever expanding social calendar. I needed a simple project as I just didn’t have  a spare brain cell to focus on anything complicated. These mitred squares were just perfect: garter stitch, one stitch marker and a couple of decreases every other row. Easy peasy, and almost meditative, giving my brain a chance to wind down before bed.

It was only as I rummaged in the yarn box that I realised my collection did hold some memories. The first square I made used yarn leftover from my daughter’s blanket and my slippers that needed so much perseverance. The next was made from even older yarn that was left after I made her a wool soaker (cloth nappy cover) when she was tiny. I also found yarn from the first ever project that I sold, and some from my best friend’s baby blanket, just to mention a few. 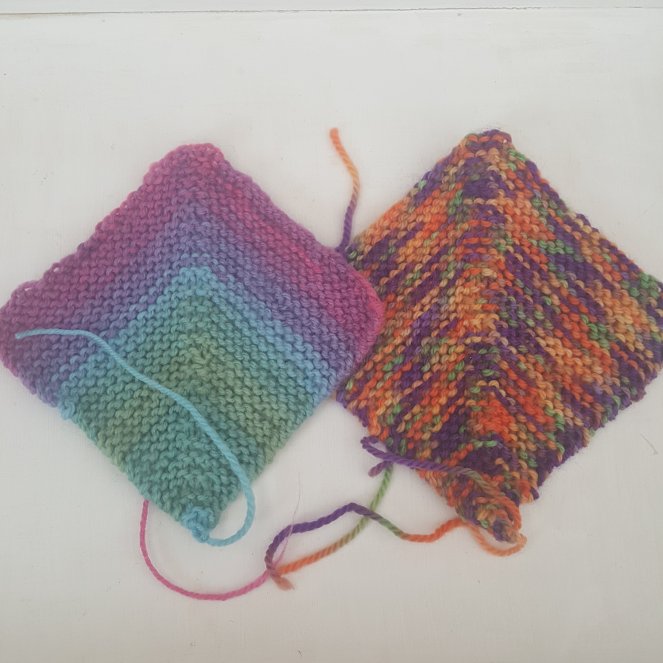 As you can see, the colours don’t quite ‘go’. I’m still in the early stages of making, and I’m not sure how I will organise it. I’m a bit too much of a control freak to go for the ‘lucky dip’ approach to selecting yarn, and I definitely don’t want to join as I go and end up with a random blanket. For now, it’s nice to have something simple to turn to on those days when I can’t tackle anything tricky. I think I’m hoping to manage some semblance of coordination when I join them. I suspect, though, that I will just end up with a heap of squares!

Have you ever made a scrap yarn blanket? How did you organise it? Please share if you have some inspiration for me!

36 thoughts on “Mitred Squares and Memories”