I could have titled this post many things, but FO Friday was a definite no (as it’s clearly not Friday) and this was the least cheesy of a very cheesy bunch. The two hot water bottle covers I’ve been working on are finally done, so I decided it was time to share them. 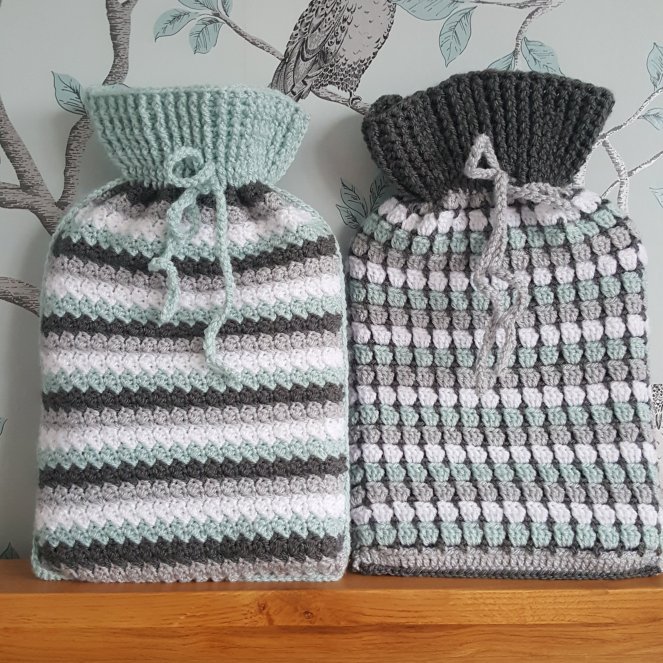 The left one will be mine, and was made using this pattern from Ravelry. (Imagine my surprise when I posted this photo in a crochet Facebook group and the designer of the pattern commented!) The cover on the right is for Mr C, and is block stitch worked in the round. The choices of patterns were tricky initially as a lot of the hot water bottle covers I’ve seen had buttons on, and I really didn’t want those because I think they could be very uncomfortable. The ties I made to gather the tops are just long chains using two strands of yarn, but they have gone curly. If they really annoy me I’ll pin them out and steam them with the iron help over them (at a safe distance).

The fact that they are made using the same yarn colours but look totally different really pleases me, as I didn’t want them to be too ‘matchy’. The darker grey on Mr C’s definitiely makes it look more masculine, whereas using the duck egg as the main colour for mine gave a much lighter effect. All of the yarn is Stylecraft Special DK, mainly because acrylic yarn is much more washable than other types and also because the range of colours is very large so I could put together my perfect mix.

I think that I’m done with accessories for our room (for now!), but it’s been fun putting colours together and making things that match our wallpaper.

What has been your favourite home decor project? Where did you get your inspiration from?

55 thoughts on “A Cosy Couple”